The Untamed (陈情令) is a live action adaptation of supernatural novel Mo Dao Zu Shi (魔道祖师), which is also available as manga and anime. The drama is about the death and resurrection of abominable Yiling Patriarch and how he cleared his infamous name with the help from an unlikely ally. The drama flashed back to decades earlier and recounted how a series of tragedies turned Wei Wuxian from a cheery young lad to a widely feared grandmaster of demonic cultivation. Then the drama flashed forward to the present day and followed him as he uncovered the conspiracy that had led to his death 16 years ago. All the while, he never gave up his unorthodox practice of channeling demonic energy to counter malevolent supernatural forces – fight evil with evil. 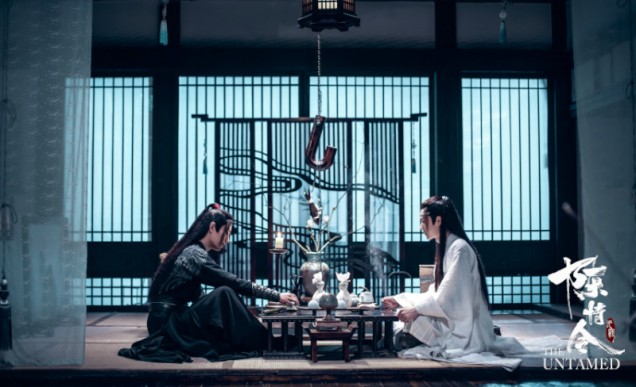 I can’t say I love all the main characters in this drama. But Jiang Yanli and her lovely dimples will always have a place in my heart. She is the best thing that ever happened to Wei Wuxian. She is the only person in the entire drama who never doubted WWX, who never said a single harsh word to him, who defended him even though it went against her nature to be antagonistic, who loved him unconditionally. A bowl of her lotus root soup with pork ribs can soothe any hurt he felt inside. To WWX, home is where ever she is.

I can watch the nose touching on loop. Only Shijie (senior sister) can make WWX grin like a happy 3 year-old.

And only she can make him feel accepted without having to prove his worth. 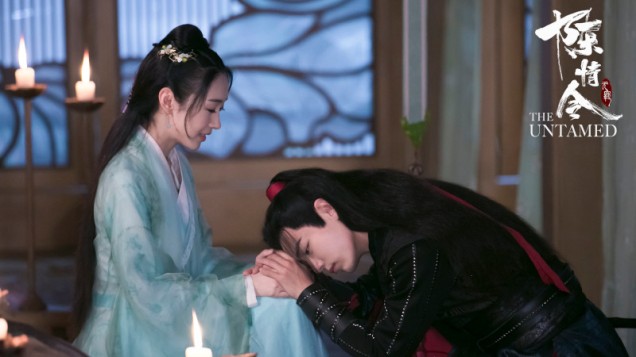 Although her brother Jiang Cheng cares as much for Wei Wuxian as her, his fierce temper and sharp tongue can slice a tender heart raw. And no one can wound WWX as deeply as he can. But Shijie has an amazing way of neutralizing her brother’s venomous words and bringing him and WWX back together without the boys ever having to say “sorry” or “thank you.” 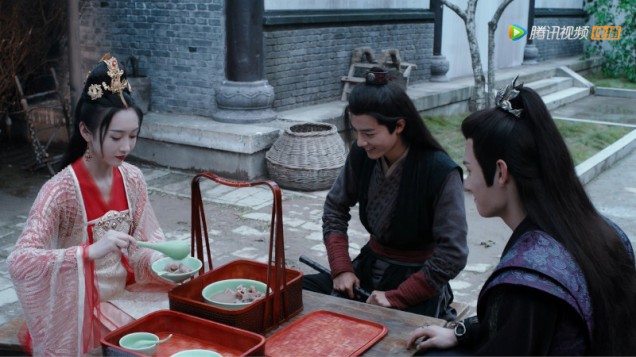 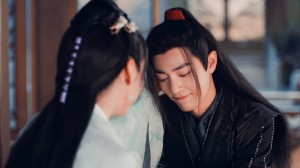 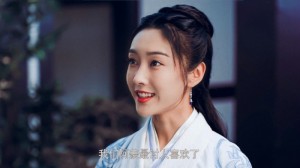 Shijie once said Wei Wuxian has a “smiling face.” Between his natural charisma and easy-going personality, he makes friends everywhere he goes. (And jealous enemies, as well.) 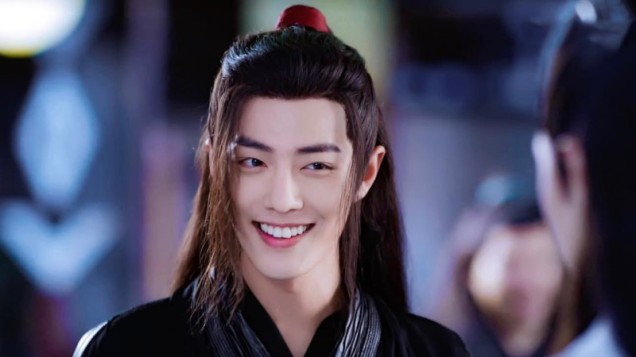 But under his carefree facade hides a little orphan boy who is terrified of being alone in the world. He wants people to like him. He craves for a sense of belonging. The Jiang siblings offer him all that and more. They adopted him and love him as their own brother. They make him feel so emotionally secure he is not afraid of being a little naughty. When he stirs up trouble, Shijie gives him a significant look and trusts that he won’t go overboard. JC berates him out of annoyance and then take the punishment with him. They stick by him just like family. 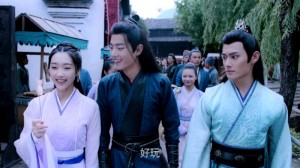 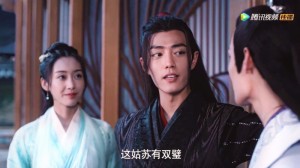 Then he attracts the wrath of the all powerful Wen clan of Qishan with his outspoken objection to their tightening control, and the Jiang clan of Yunmeng pays the ultimate price for his disobedience. The Jiang parents die protecting the three of them. Shijie falls ill at the shock. Jiang Cheng loses his golden core, the source of his spiritual power, and falls into deep depression. For the first time in WWX’s life, he feels guilt-ridden and lost. He is terrified of being hated by the Jiang siblings and getting cast out from their lives. So he researches day and night for a way to restore JC’s golden core. Hoping against hope that they can forgive him for bringing disaster to their doorsteps.

Shijie, empathetic even in her grief, sits WWX down for “the talk.” She never once says she forgives him because that would imply he has done something wrong. (And we all know it’s not his fault. The Wen family is only using him as their flimsy excuse for their planned invasion.) Instead, she reminds him of his promise to restore them back to their home. She tells him how much she needs him and how scared she feels to have no one by her side. She again asserts that they are a family and she wants them to be together forever. With that, WWX is back in their embrace. 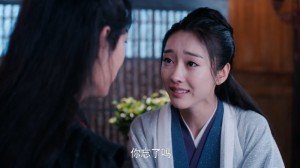 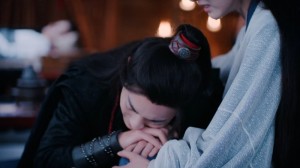 While Shijie is able to flip the page on the most traumatic chapter of their lives, JC still has a long way to go. Without the golden core means JC can only live like regular people. He has no capability to avenge his family or get back his rightful place. So WWX decides to give his core to JC. He can adjust to living like a regular person as long as he has the Jiang siblings by his side, but he knows JC would rather die than to live like a nobody.

To accomplish the transfer requires two things: A skilled surgeon to do the transplant; and doing it without JC and Shijie knowing the truth. He found his collaborators in the Wen siblings, who, as skilled healers, abhor the action of their leader. At the risk of their own lives, they secretly smuggle JC from captivity and harbor the siblings from manhunt. Although Wen Qing tries to dissuade WWX from sacrificing himself for a risky procedure without guarantee success, WWX nonetheless pushes forward. And it is the first of many radical decisions that turns him into the notorious Yiling Patriarch who is known for using demonic energy instead of his own spiritual power to battle his enemies. 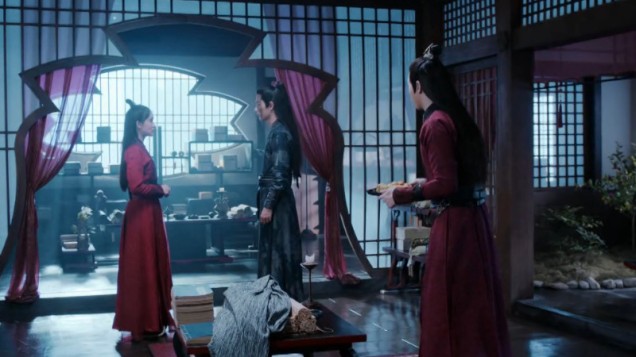 He applies his newly acquired skill on his number 1 enemy: The Wen of Qishan (The Wen siblings excepted). His participation in the war to overthrow the Wen is what turns the tide in their favor. He is able to kill the Wen in mass numbers, in the most gruesome and nightmarish manner, by calling forth the spirits of vengeful dead with his flute and Yin Tiger Seal. Despite his illustrious contribution, his comrades feel a strong apprehension over his ghastly methodology. None more so than Lan Wangji. But WWX brushes his concerns right off to the side. LWJ needs to mind his own business. 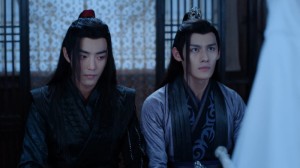 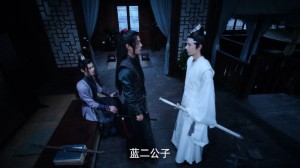 Just look at Shijie, she only feels joy and gratefulness to see him alive and well. She doesn’t care how he fights, as long as he comes back to her. JC agrees with her point of view. 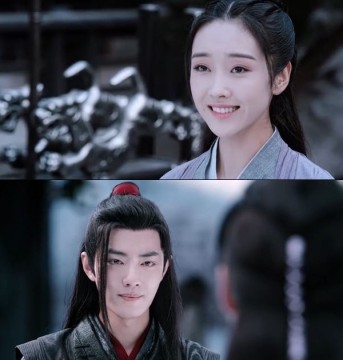 WWX’s increasing ease in harnessing demonic energy does not mitigate the overwhelming sense of loss of his spiritual power. Although Shijie and JC can see WWX isn’t acting like himself, they put the change down to their altered circumstance. That is, until WWX openly accuses the Jin clan of Lanling of being Wen 2.0 and defies the popular call for revenge by breaking the “wicked” Wen siblings out of jail. He is too late to save Wen Ning, so he resurrects WN to avenge himself. Zombie WN doesn’t just kill the guards, he rips them into shreds. The brutally of it shocks WWX out of his rage. But what is done is done, he leads the Wen siblings and their surviving clan to the Yiling Mountain and sets up camp there. He fortifies the place with zombies, vengeful spirits, and curses. None of the clans is able to break in. So they pressure JC to “bring WWX back to the light.”

WWX rejects JC’s plead for him to leave the Wen siblings and come back home. So they officially part ways with a dual, which ends with a broken arm for JC and a hole in the stomach for WWX. It is just an act. WWX’s public rebellion is to get others off JC’s back. WWX continues to communicate with the Jiang siblings through the back channel. The only regret is that he can’t attend Shijie’s wedding. Him being the villainous Yiling Patriarch and all. But Shijie, ever so considerate, comes to him in her wedding gown. She asks him not only for his blessing but also to name her future child so WWX doesn’t feel left out. She melts my heart. 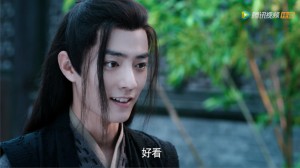 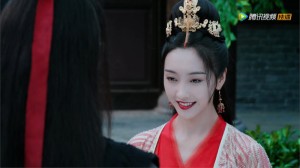 The uproar WWX caused by sheltering the Wen siblings dies down with time. Disappointing his critics, he didn’t commit any despicable or inexcusable crime in the year he camped out on the Yiling Mountain. His good behavior (boring domestic activities) enables Shijie to convince her husband, the young master of the Jin clan, to invite WWX to their son’s one month old party, which is a great opportunity to bring WWX back to the fold. Both Jiang Cheng and Lan Wangji wholeheartedly support the idea. 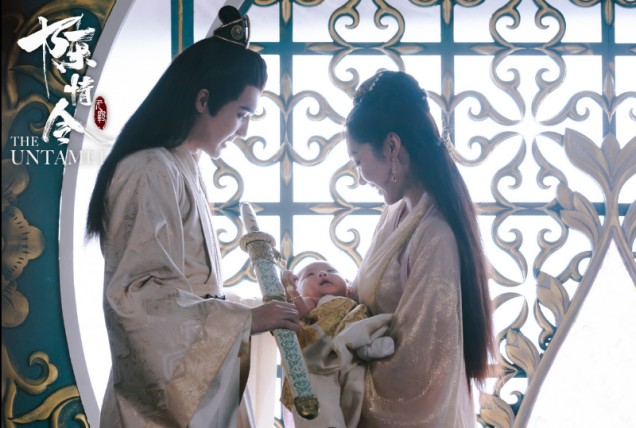 Unfortunately, not everybody welcomes his return. WWX’s jealous enemies set up a trap for him along the path to the party location. Shijie’s husband rushes over to intervene but he is too late. In WWX’s anger, he has lost control over Wen Ning again, and the zombie is massacring everyone in sight. And then the unthinkable happens, WN kills Shijie’s husband. Gasp! If Shijie didn’t blame him for her parents’ death, she surely will hate him for killing the father of her child.

WWX vacillates between wanting to hide from Shijie’s accusatory loss and wanting to beg Shijie for her forgiveness. Wen Qing finally has to put him down because of his extreme mood swings. While he is in his medically induced coma, calamity falls on the Wen survivors. The Wen siblings had hoped that by turning themselves in would appease the angry mob who is out for WWX’s head. Their action does the opposite. It emboldens the mob to wipe out the remaining Wen clan. 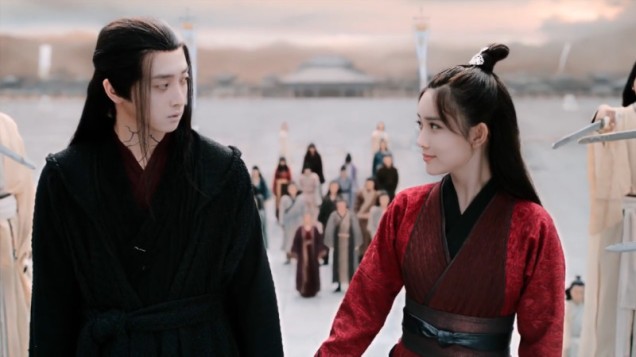 Upon seeing the corpses of Wen survivors dangling over the gate and overhearing the excited gossip of a major clan gathering to seal their pact to annihilate Yiling Patriach, WWX bitterly decides to crash the gathering. He toys the attendees with continuous attacks from vengeful spirits with music from his flute. (He is careful to avoid JC and his apprentices.) Not even Lan Wangji’s direct assault could stop him. Then suddenly he hears Shijie’s voice from the battlefield calling out for him and JC. WWX immediately tries to halt his attack, but another music supercedes his and he loses control of the vengeful spirits. Soon, the battlefield is no longer human vs. spirit but human vs possessed human. And to WWX’s infinite horror, Shijie is slashed by a possessed human.

Despite being wounded because of WWX, despite her husband and her parents getting killed because of WWX, Shijie holds tight to WWX’s hand. The first thing she says to him is not his dreaded accusation but her calling him, “Xianxian,” her most endearing nickname for him. Immediately, tears of guilt and helplessness gushes out of him. 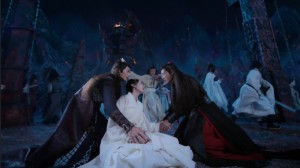 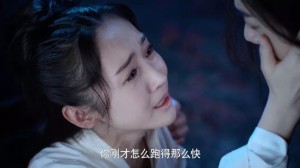 But he barely has the time to utter a word when Shijie suddenly pushes him to the side. Next thing he and JC see is a sword piercing Shijie’s chest. Then a man denying being at fault and everyone blaming WWX for all the death that happened. 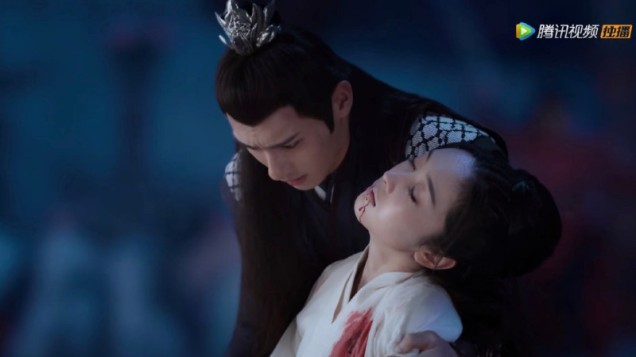 See the fury that emanates from WWX? It’s a look that says, “people are going to die today and they are not going to die well.” 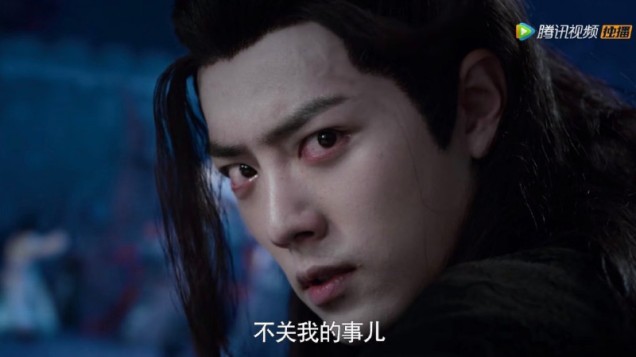 He throws Yin Tiger Seal into the crowd and watches with contempt as people lose their minds fighting each other over it. What an ugly world this is! So many people and not a friend on his side. He can’t see Lan Wangji standing in front him worrying about him. He only sees his own grief: Everyone who cares for him is gone. Wen siblings died. Shijie died. Jiang Cheng now hates him to the bones and Shijie will not be there to patch thing up for them. His worse nightmare has come true. He is alone with no place to call home. So, he steps closer to the edge of the cliff and jumps off it. And for the next 16 years, he is dead to the world. 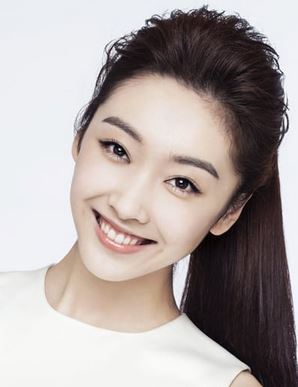 5 thoughts on “The Untamed 陈情令”

This site uses Akismet to reduce spam. Learn how your comment data is processed.